The Mega Buster, also known as the Rock Buster, is the primary weapon wielded by the titular character of the Mega Man games. It is a small blue cannon that replaces Mega Man's right forearm and fires pellets of energy.

The Mega Buster's ammunition is solar powered, allowing Mega Man to fire an unlimited amount of compressed energy bullets that could split boulders in half, usually in a three round burst. It has the ability to be charged up in later games, the longer the shot is charged the more destructive power the cannon gains. 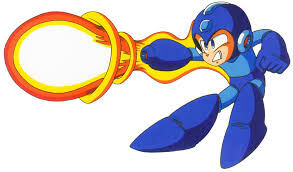 Add a photo to this gallery

Retrieved from "https://fictional-weapons.fandom.com/wiki/Mega_Buster?oldid=4257"
Community content is available under CC-BY-SA unless otherwise noted.